The primarily intended users of Voice4u is individuals with autism. Autism is a disorder of neural development that is characterized by impaired social interaction and communication, and by restricted and repetitive behavior. These signs may begin before a child is about three years old. Autism affects information processing in the brain by altering how nerve cells and their synapses connect and organize. Autism has a strong genetic basis, although the genetics of autism are complex and it is unclear whether autism spectrum disorders (ASD) is explained more by rare mutations, or by rare combinations of common genetic variants. 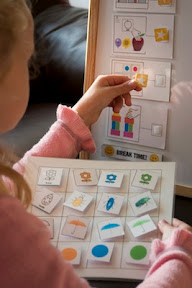 One of the characteristics of ASD is the development disorder of person’s ability to communicate and interact with others. However, because children with ASD could recognize, analyze and comprehend visualized information sufficiently, various icons or visual images are encouraged to be utilized for communication. The importance of visual aids for interpersonal communication would be equivalent to that of wheel chairs for people who cannot walk.

Conventional communication-aids devices and tools available in the market have been either expensive or inconvenient, or both. For instance, if a family with a child with ASD wanted to purchase a communication-aid device, they would usually seek coverage by their medical insurance for the cost because the device would cost more than a few thousand dollars. Consequently, it would nominally take 2~6 months to obtain approval by the insurance, prior to which they would need to visit their speech therapist several times to obtain the therapist’s assessment which is normally required by an insurance company. Furthermore, it would usually be necessary to incur attorney’s fees to negotiate with the insurance company because insurance companies would not approve such a high cost without resistance. In addition to such difficulties to obtain insurance coverage, conventional AAC devices are:

Despite such difficulties, many parents who have children with ASD and people associated with them have been seeking for communication tools because the lack of communication would cause many negative effects to children with ASD, for few example, making shrieking scream without apparent provocation in public from frustration or behaving aggressively towards other people to release anger, and further delaying intellectual development.

Voice4u is a revolutionary AAC (Augmentative and Alternative Communication) application that helps individuals to express their feelings, thoughts, actions and things they need, as a solution for learning and communication for autistic individuals, children and other adults with developmental disabilities, stroke and/or traumatic brain injuries, and people around them.

As such, Voice4u is superior to ease the communication burdens of people with ASD and those who interact with them. Many people’s supports and understanding are being required for people with ASD to live and interact with other people in the community. Such supports cost heavily to individual and to the community if only conventional communication-aid devices and tools are available. However, the development of Voice4u has reduced the number of people required for such supports, and cost thereof to individuals and the community. Consequently, Voice4u would contribute to improve quality of lives of people with ASD, and will continue to benefit the society that is anticipating increase of needs for equipment to assist communications.

Voice4u can also be utilized by people suffering from other types of developmental disorders, such as PDD (Pervasive developmental disorder), Down syndrome, or Asperger’s syndrome; people with other communication disorders, such as deaf, stroke, brain injury; or seniors those who have difficulties with verbal communication. In the United States, 1 in 88 children are diagnosed as autism as of 2012 according to Center of Disease Control and Prevention (CDC).

The rate is even higher for boys, which is said to be 1 in 58 children. The similar trend is also found in other advanced countries. PDD and Asperger’s syndrome are said to be 2.7 cases per 1,000, and Down syndrome is found 1 in 800 births. Around 2.6% of the U.S. population is functionally deaf. People who had a stroke or brain injury could benefit from Voice4u if their injury resulted in communication disorders, which would be approximately 0.44% of the U.S. population. Another aspect is that 8~12 in 1000 people require AAC (Augmentative and Alternative Communication) communication based on American Speech-Hearing-learning Association (ASHA)’s research. Therefore, from autism to seniors with difficulties in communication, approximately more than 5% of the entire population would be potential users of AAC apps on smartphones/tablets including Voice4u.